A ministry of healing since 1952 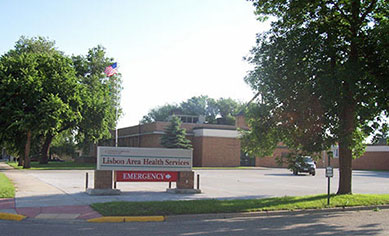 At CHI Lisbon Health, we believe humankindness is at the root of all healing – providing care on a human level, courage when it’s needed the most, and a connection that is ever present among us all.

We can help you right here in Lisbon.

CT scans and digital mammograms. Surgery. Cardiac rehabilitation. Overnight care until you’re ready for home. You might be surprised to know we can meet most of your medical needs right here, saving you the long drive to Fargo. So for medical care let us help you with your outpatient tests, rehabilitation and emergency medical care.

We can help you on the road to recovery.

Want family and friends close by when you need care overnight or longer? We can help. We’ll give you the support you need close to home. Whether you need nursing care or physical or occupational therapy, our team here at Lisbon Area Health will work with you to help you recover.

We can take your images right here in Lisbon.

Want a digital mammogram? A hassle-free MRI? An ultrasound without the drive? That’s our job. Here at Lisbon Area Health we have advanced imaging systems. So let us help you with your imaging, hospital and rehabilitation needs.

If the unexpected happens.

Having a place close to home where you can receive emergency care isn't just about convenience, it's a necessity. Lisbon Area Health Services is here to handle your emergency care needs, 24 hours a day, every day.

A familiar face is part of our team. Let us help you with your outpatient, inpatient, rehabilitation and emergency needs. We are right here, next door.

Accessible and Convenient to get to!

From a sore throat or sports physical to your annual preventative health checkup, we offer convenient scheduling as well as walk-ins. Onsite lab and radiology in house help lead to quality and timely care.

This is the time for human kindness. Donate to CHI Lisbon Health today!

Providing valuable information to help you manage your health.

In 1967 an addition was added to the northeast portion of the hospital, which became a 20-bed nursing home wing.

It was determined that additional space was needed and another addition was made to the south of the existing structure. This was completed in 1976 and became the new hospital wing. The previous hospital wing was converted to 25 nursing home beds.

In 1992, Community Memorial Hospital and Nursing Home celebrated 40 years of dedicated service to the sick.

By 1996 a remodeling project had been completed and a clinic was moved into the facility. At this time the facility?s name changed to Lisbon Medical Center.

The facility was acquired by Catholic Health Initiatives on October 1, 2002 and changed their name to CHI Lisbon Health.